The 1920 U.S. Census measured 506,417 people in the Mountain Resources Commission (MRC) region – 19.8 percent of the state’s total. The MRC region’s population has grown at an average annual rate of about 1.87 percent since 1920, significantly less than the state’s average annual population growth rate of 3.02 percent over the same period. A century ago, the MRC region had a population density of 45.1 people per square mile, while statewide there were about 52.5 people per square mile. Henderson (485 percent), Caldwell (316 percent), and Burke (290 percent) counties have experienced the most population growth since 1920, while the populations of Madison (3.4 percent), Swain (5.7 percent), and Yancey (18.1 percent) counties have increased the least. 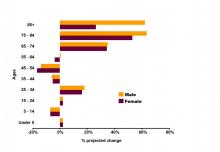 As Western North Carolina’s resident baby boomer generation ages, projections into 2025 show vast increases in the older populations of individuals. The need for health priorities changes as particular medical resources are required to treat or care for the health challenges that arise with age. With expected increases in aging populations within the next 15 years, efforts to provide sufficient access to care, specialty clinics, and preventative treatment become a regional priority.